As an introduction (and as I had nowhere else to put it!), I include a report from the Dorset Year Book for 1952 - 53 on the Old Grammarians Club dinner, held on 12 January 1952.
The report was kindly sent in by Nigel Newbery. 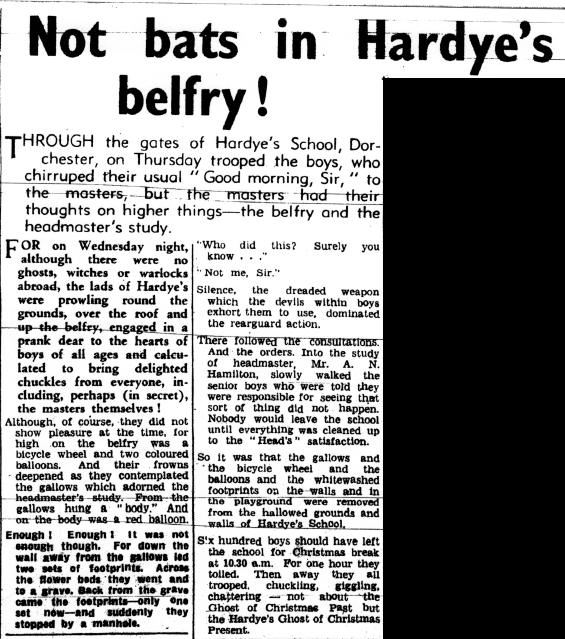 "The Chairman recalled his early days at the school when the number was about 40; today it was 470, including 100 boarders accommodated in three boarding houses - such was the result of the great work of the Headmaster.

" In welcoming Old Boys from London and Oxford, Mr. Hill remarked that it was exactly twenty-five years and a day since he had attended at the Town Hall to meet members of the Old Boys' Club - from that time, he had always felt that he had a corporate spirit behind him and the Club now had the right to elect two of their members to the governing body; in all, six members of the governing body were Old Boys and all were present that night.

"A tribute to the hard work of Mr. John Shellabear as provisional chairman of the Club was paid by Sir Thomas Salt and, in reply Mr. Shellabear announced that a general meeting of members would be held towards the end of the month to formulate future policy. A novel feature of the later proceedings was the reproduction by Det. Superintendent E. Rossiter of records made earlier in the evening of impressions of several of the old boys."

Below you will see the links to the annual reunions of the class of 1953 that have been the great achievements of Nigel Newbery,
with the assistance in recent years of Ernie Middle to include the class of 1952:

Here is the link to the Southfield House Reunion 2008, organised by Chris Etherington:

Here are the links to the reunions of the class of 1956:

Here are the links to the reunions of the class of 1958:

Don't forget, if you have any photos on file that you would like to see displayed on this site, please e-mail me.